The American Kenpo Jiu Jitsu Academy opened in 1990 and for over two decades, We have been serving the community helping  hundreds of children, teenagers and adults to develop confidence, respect, focus, concentration, physical fitness and other unique benefits of a martial arts education.

As instructors we make a commitment to our community: We do whatever it takes to help each student become successful not only in the martial arts, but also “achieving their black belt and beyond” in every area of life…

“Train your students to be better than yourself.”  – Senior Master Tabatabai

Is to enrich the lives of our students & their families with prime martial arts education and valuable life skills.

We share a community where healthy, supportive & value oriented families can come together and help each other to successfully reach their goals.

We envision a future where every student achieves their highest goals, live happy balanced lives and work hard to become the new leaders of our community, country and world.

Our members can learn with us Self Mastery Skills and the most effective combination of stand-up and ground Self Defense techniques, weapons training and physical fitness. Through our practical approach to self-defense, our students quickly become capable of defending themselves in virtually any situation. 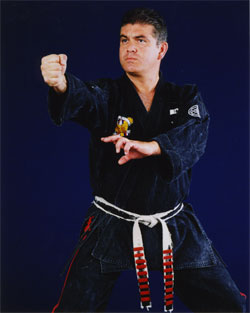 In 2008 Mr.Tabatabai began training in Brazilian Jiu Jitsu at the Gracie Academy in Torrance under
Masters Ryron and Rener Gracie. He continues to train daily under Master Jean Jacques Machado.

His expertise goes beyond his physical skills: Serving the international martial arts community, sharing his innovative vision and helping hundreds of practitioners and school owners around the world to become better role models, students of the art and leaders of their own community.

Through his decades of intense study and dedication to American Kenpo, Senior Master Tabatabai became increasingly aware of a gap in the system: None of the techniques included defense if you were taken to the ground.

Our martial system is a blending of two practical and robust arts: Ed Parker’s American Kenpo and Gracie Brazilian Jiu-Jitsu. American Kenpo is internationally recognized as one of the premier stand-up martial arts, well known for its speed and power. Brazilian  Jiu-Jitsu is the current world-leader in grappling and submissions. We teach each art so that it remains true and complete to its unique style, yet combine them in seamless application. The synergy between the two arts is so complete you will not know where one ends and the other begins.

I sincerely look forward to meeting you, and helping you and your family accomplish your goals! 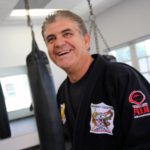